Of all the beautiful spots to visit in San Francisco, this is one of my favorites. A giant walk-in camera taking 360-degree real-time images of the sea. For a $2.00 entry fee, we are given the gifts of seaside panorama and peace.

Named Camera Obscura, for the Latin translation “dark room,” it operates on the photographic “pinhole image” concept that dates back centuries, based on a natural optical phenomenon.

Rays of light travel in a straight line, a law of optics. When rays of bright light pass through a small opening, like a pinhole, they reappear reversed and inverted. By using a dark room, two lenses, a mirror, and a surface, the images turn right-side up and appear before you.

The small building is perched above Ocean Beach in San Francisco, overlooking the Pacific Ocean. It is on the register of National Historic Places.

The mirror is in the triangle at the top, lenses below it, and the turret rotates.

Image on screen inside the Camera Obscura

The concept of capturing light into images, like the Camera Obscura, is similar to the human eye. From Wiki: “The human eye … works much like a camera obscura with an opening (pupil), a biconvex lens and a surface where the image is formed (retina).”

The oldest mention of this phenomenon dates back to 5th Century China. 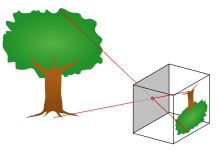 In the 16th century, philosophers, scientists, astronomers, and artists used the light tool for viewing eclipses, studying light, and even drawing. Before mirrors and lenses, they simply used the light and the pinhole. It was a fascinating topic of interest for scholars, and interpreted as an invention of the devil for others.

Camera Obscuras are the first cameras. Photography pioneers like Fox Talbot, Niepce, and Daguerre created cameras by modifying Camera Obscuras. Soon after, when light-sensitive plates and film were invented, the Camera Obscura was no longer necessary.

This one in San Francisco was built by Floyd Jennings in 1946 for a popular amusement park in the 1900s, Playland at the Beach. When Playland closed in 1972, the structure was relocated to its present location, behind the Cliff House at Ocean Beach.

For those of us who can never get enough of Camera Obscuras, a good website to feed your fix is brought to us by Jack and Beverly Wilgus, scholars of this phenomenon:  Magic Mirror of Life

You might wonder, why would this be anything great these days when you have a phone in your pocket that takes excellent photos? Or easy-access live cams? Or why would you go inside a building when you have the whole outdoor image in full view?

Because with the Camera Obscura, you are in the camera. Inside the camera.

Outside it is noisy from the wind and the crashing waves, and sometimes blindingly bright from the vast, open sea.

You walk through the curious saloon-style doors and enter a world of magic. At first you can’t see anything, going from the brightness of day to darkness.

But then your eyes quickly adjust, and your body relaxes in the darkness and peace. You’re in a special little cocoon.

On the screen before you are the ocean waves silently lapping against the beach. Surfers in wet suits, dogs and dog owners walking the beach, cars moving down the Great Highway. The image slowly rotates, constantly changing, just like life…only softer and gentler.

Way out in the distance are ships sailing the sea. Closer in are large boulders covered with cormorants and gulls.

In that dark and hushed room you enjoy a few magical moments of gentle light and silence, and see the profoundness of life as it is unfolds.