From the galaxies above…

to the sea floor below…

and everything in between.

Let us find the tools to see past the noise of the day,

and recognize the heroes and miracles

that surround us every day.

When the sun goes down and the night turns black this Halloween, there are plenty of wildlife creatures to send shivers up the spine.

Owls, our most famous nocturnal creature, have serrated feathers for silent flight. They can glide right past you invisibly and soundlessly…all you know is a faint breeze on your face.

The shadows of the rainforest can make the small creatures large…

and the large creatures gigantic.

And where would our scary nights be without bats? In Australia the bats are so big their scientific name is megabats. Here are two species of megabats.

In the Trinidad rainforest we discovered a steady stream of these Long-tongued Bats shooting out of the lodge basement every night at cocktail hour, like clockwork.

A walk through the Australian rainforest brings out animals most of us have never heard of like brushtail possums and sugar-gliders.

Even creatures who are not nocturnal, like this lizard, lurk in the night…they have to sleep somewhere.

One night while Athena was photographing sugar gliders, cicadas came in, attracted to the lodge’s yard light.

I was admiring their bright green color and thinking how much bigger their cicadas were here in Australia, than ours at home. Bigger than my thumb.

I thought they were very cool…until one landed in my hair.

I screamed. Panicked and beat my hands through my hair like a crazy person.

And Africa has a very animated night life when it comes to wildlife. Moths as big as birds; and of course all the nocturnal mammals that are out hunting–lions, leopards, hyenas, to name a few.

The African savanna at night is like no other place on earth. Bumping along in a jeep past the black expanse, at first you see nothing. But then you start to see eerie eyes shining back at you. Pairs of eyes. Everywhere.

The eye shine has to do with a reflective layer behind the retina that helps the animal see better in the dark.

We were cruising along when we heard a lot of sloshing. The guide whispered for us to get our cameras ready.

Here’s what the light revealed.

The most terrifying night sound I have ever heard was in the Amazon rainforest: the howler monkeys. I’ve mentioned it before, but will include a sound clip again.

Howler monkeys are territorial so when one starts howling, announcing its supreme existence, they all start up. It has a stereo effect that permeates the forest in the most haunting way, sounds like a combination of tornado winds and deep-voiced gorillas.

Imagine hearing this in the dark as you’re walking to the bathroom.

Wild monkeys, hyenas, leopards, owls, bats…a great way to get your Halloween sufficiently spooky. And while these animals may get your heart jumping, erratically even, they’re really not interested in hurting you…well, some aren’t.

As we step forward into a fresh new year, and decade, here are some wise words from a few of my wild friends.

Greet each day with a smile.

Enjoy the search for life’s nectar.

but on crabby days, lay low.

and drink plenty of water.

Wildlife, who have to physically work for every bite, like to remind us humans of the importance of movement. They tell us to …

Wildlife remind us to:

Hang out with our mates …

and cherish our loved ones.

Try to get along with everyone …

but when it’s not possible, take leave.

And because we are granted many days in each new year, there are bound to be some bad days too. The wisdom there is:

When life gives you dung, be a dung beetle.

It’s good to be industrious …

but don’t forget to take time to perch …

All photos by Athena Alexander.

In this fresh new year — try to find a spark of  joy in every day.

It could be a spot of bright nature;

or something new you’ve never seen before;

Conversely, joy could appear in something you see every day, but never stopped to appreciate.

We can find joy in remarkable human engineering feats;

or art, so many forms of art.

Some of the most cheerful joy comes in simple forms.

There will be times, however, in the new year when difficulty or despair take over.

Joy might not be readily accessible in the darkness.

For these times, go to sleep, rest…

Written by Jet Eliot
All photos by Athena Alexander.

On this holiday, one that is shared across the globe, here are a few of earth’s wild and worldly inhabitants to remind us how to find peace.

Enjoy the gifts of food

and water, and help those who do not have it.

Take in the glories of nature wherever it appears.

and navigate the dark.

May each day begin with song

with times when you shine

Take comfort in your community

yet reach out beyond it.

Demonstrate patience and compassion to the young

Embrace these basic elements of life,

and you will have peace and love

every day of the year.

Thank you, my friends, for another great year of sharing.

…the sweet nectar of life

this holiday season and

throughout the new year.

One of the world’s tiniest hummingbirds, the tufted coquette is about the size of a credit card. They live in rainforests and gardens, in a few countries in and around South America. Hummingbirds are a symbol of joy.

On this Memorial Day weekend, I share with you some of the beauty of America.

All photos by Athena Alexander

May you find the tender leaves of hope

wherever you turn in this new year.

Plenty of beauty on your path,

Happy Holidays, my friends, and many thanks for your valuable friendship~~

A good last minute gift is a digital e-book, and I know just the one — it’s hot off the press, suspenseful, and written by someone you know. Also available in paperback.

Purchase from the publisher or Amazon or any major online book retailer.

As we celebrate Earth Day in an era when human population and cities are burgeoning, it is inspiring to see the growing utilization of green roofs.

A few of the environmental virtues of green roofs:

Defined as a building roof partially or completely covered with vegetation and a growing medium, green roofs have become a new trend in the 21st century…but they are not new.

Until the late 1800s, sod roofs were the most common roof on Scandinavian log houses.  Sod roofs, made with birch bark, kept the house insulated from cold and moisture.

Eventually sod roofs fell out of vogue, but were revived in the 1960s in Germany.  Today Germany has the most green roofs in the world; where they are part of the landscaping apprentice education.

San Francisco’s natural history museum, The California Academy of Sciences, was completely renovated in 2008 due to earthquake damage.  This gave them an opportunity for new environmental upgrades, including a green roof.

In the center of this large city, the roof provides 2.5 acres (1 h) of rolling hills and fields.  A living science exhibit, the roof is open to museum viewers.

I visited there recently and not only was there a terrific view of Golden Gate Park, but white-crowned sparrows serenaded and butterflies fluttered past me.

Green roofs vary depending on the depth of the planting medium.  The deeper the layer of earth, the more installation and maintenance is required.  A waterproof membrane and root barrier are always involved.

Rooftop container gardens, though beautiful, are technically not green roofs.

Learning how to maximize our urban centers into earth-friendly expanses will go a long way toward supporting and enhancing our growing population. 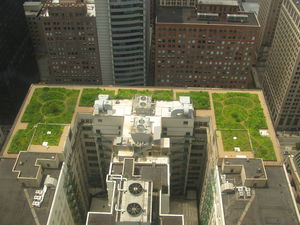