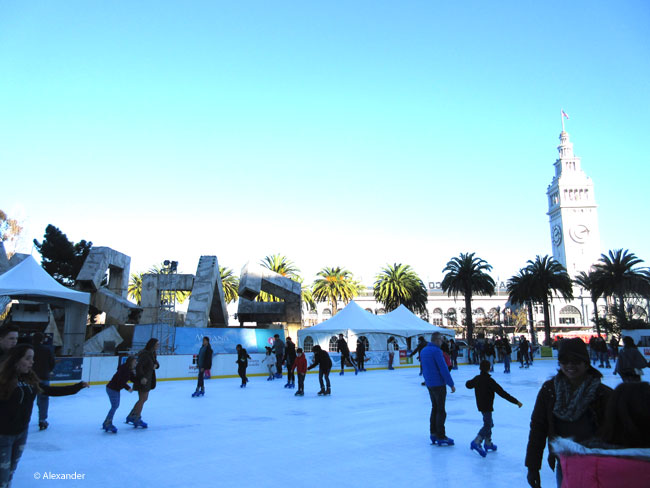 Outdoor skating in sunny California — how does that work?

I went to San Francisco’s Embarcadero rink last week, to check it out. For years I had heard friends talk about it, but I was skeptical, having grown up in Wisconsin where freezing temperatures were always part of the package.

There is a company who specializes in temporary outdoor skating rinks, they service cities around the world. Then sometime after New Years Day it all comes down until next November. 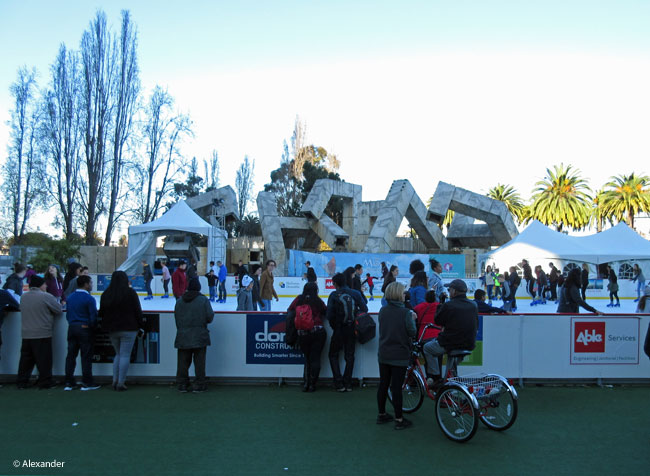 For $11 per person, it offers excitement, exercise, and a few wobbles and tumbles at no extra charge.

It so popular that skaters have to make reservations, are committed to a timed session. Music is pumped in and a Zamboni smoothes the ice in between sessions.

In Wisconsin, we skated on huge expanses of frozen lakes and ponds; and quickly figured out where the smoothest ice was. Every winter my father also rolled out plastic sheets and transformed our dormant vegetable garden into the neighborhood ice rink.

The ice-smoothing machine was invented in the Los Angeles area by two brothers and their cousin, the Zambonis, in 1940. They used the Ford Model A as a prototype.

Ice melts in warm weather, but the magical Zamboni comes along and scrapes the chips and fills in the gaps. It’s a real science, making ice, read about it here.

Personally, I had enough of cold weather to last me a lifetime. It was fun as a kid, but then I grew up; drove my first car across an ice patch into a concrete wall, lost a million mittens, and was always freezing. So when I got old enough, I moved to California.

Still, the snow is pristine and hushing, and creates some of the most lovely vistas. I still find it beautiful to look at.

I like to watch the ice skaters circling the rink, I like to look at beautiful photos of snow, and I like traveling to the tropics. It’s a wonderful world, having these options.

Here are a few places I go for beautiful snow adventures:

alittlebitoutoffocus.com – Mike lives in the Alps 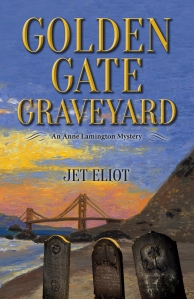 In case you want more of San Francisco, I know a good book written by someone I know. Oh yeah, me.

Outside Jeopardy Studio at Sony Pictures

I had an energizing urban adventure last week in Los Angeles.  There’s a popular quiz show in America called Jeopardy, and it goes all the way back to 1964.  When I was a kid my mother would reward us a penny for every correct answer.

In my young adult years I fantasized, like most other viewers, about becoming a contestant.  I felt I did pretty good with correct answers.  Then more years passed and reality hit.  Turns out I’m a writer, and also shy by nature.  I like to sit in the back of the room and watch all the stories unfold.  Put a moving camera in front of me and I either freeze or giggle.  Being a front stage contestant was just not for me.  So then I decided to visit the studio and simply watch.  And this is what I did last week.

I’ve been to studio tapings before and was aware that much of what you see on the television screen is very different from what you see in real life.  I prepared myself for the illusion.

At the appointed time and date, we stood in line outside in an alley surrounded by giant murals of TV shows; then about 50 or so of us filed into the studio.  Inside there were contestants on stage rehearsing with a pseudo-host.  They were getting familiar with their signaling devices and answering questions, while production staff and sound engineers bustled around adjusting microphones, cameras, and lights.  The game board and other things did indeed look different than on TV, there were illusions; but they were minor. I also saw there was not as much magic as there was hustle.

Once we were seated, the announcer Johnny Gilbert told us how important we were to the show. Live clapping is better, he explained, than canned laughter.  He made me want to do the best possible job of clapping.  His rich voice lifted me in its familiarity, this voice I hear every night but never had a face to place with it.  Now I had a face, one of warmth; and his generous time and openness with us transformed me.  I stared at him, taking it all in, as he told us what to do.   Later, when we could ask questions, I asked him about their volume of fan mail and he gave an articulate and enthusiastic response.

mock set up (no photos allowed on stage)

When it was time to go on the air, the countdown started:  Five, Four, Three, Two….  As if I was an astronaut about to catapult into space, I was filled to the brim with pure excitement.  Pink lights flooded the stage, the theme song I’d known for my entire life blasted the studio.  Johnny Gilbert at his lectern shouted out in his booming voice, “This Issss Jeopardy.”  I thought I was going to explode.  Then Alex Trebek came marching out from behind the stage, initiating another one of the more than 6,500 shows he’s hosted. Oh did I ever clap hard.  We all did.  I looked around and saw the whole studio audience smiling broadly and clapping heartily.

During the commercial breaks Mr. Trebek (how can I address him as Alex?) came over to the audience.  He is just as handsome in real life as he is on television, but he’s more entertaining in person.  As a TV viewer you pick up on his dry humor and self-deprecating jokes, but until you’re there at the studio, you don’t get to hear all his jokes or witness his theatricals (he tap-danced for an impromptu half-minute).  Most importantly, you don’t realize how hard he works and how easy he makes it look.

They tape five shows a day.  At 7:30 that morning Mr. Trebek gets the material for all five shows of the day.  At 61 clues and answers per show, and five shows a day, he facilitates 305 questions a day in front of a television audience of nine million people.  He’s done this for 30 years, and so has Johnny Gilbert; but you would never know it from their level of enthusiasm.

It’s an array of impressive feats for everyone on and off that stage.  We watched one of the judges call up to heaven for a ruling on a question, saw the answer man behind the curtain, watched the director demonstrating to contestants how to flail their arms and project their voices for a future commercial.  Was even introduced to the Clue Crew!  Everyone has a designated job on this team, and they are all important to the success of the show.

As a writer I sit alone at the computer typing and deleting thoughts all day long.  No one sees me, yet my office is filled with voices, dances, catastrophes, and murders that all reside within my busy head.  Things originate in my head and they blossom out in the world after that.  To sit in that studio audience chair at Sony Pictures and see what happens after their writers and researchers have done their work, to actually hear the music and bells, see the colored lights and flashing signs, the waving arms and gestures, and witness the bloopers that will be edited out later…it was all a dream come true.

It was also a reminder.  We all work away on our day.  Sometimes it feels boring, uneventful, even futile at times; we work day in and day out.  But it seems to me that just when you need it, we are reminded of how our work fits into the big picture and how important our work, our existence, is.  Everything we did from the time we were a kid on the floor in front of the TV up through today…it all matters. And just between you and me:  I hope in 30 years I’m as smooth and cool as Alex and Johnny.