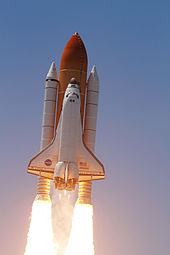 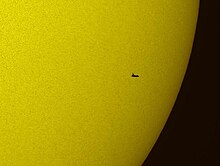 Visitors first entering Kennedy Space Center’s Visitor Complex are greeted by several authentic rockets towering above. Heads looking up to the sky, each person is handed a brochure with a map and exhibit information, and off we go, launched into the world of space.

The Kennedy Space Center (KSC) is comprised of 700 facilities on 144,000 acres (580 km2); and has the distinction of being the launch site for every United States human space flight since 1968.

This shuttle stack is a 184-foot (56 m) full-scale replica of what is needed for a space shuttle to be shot into space: external fuel tank (orange) with twin solid rocket boosters (white).

Historic space programs like Apollo, Skylab, and the Space Shuttles were carried out here at KSC, while other space programs, like Gemini flights, were launched from adjacent Cape Canaveral Air Force Station.

Today this area, on the Atlantic coast of Florida, is bustling with robotic and commercial crew missions, and other missions dedicated to future off-Earth exploration. Launches occur regularly.

Much of it is a restricted area, but there is a large Visitor Complex open to the public.

The KSC Visitor Complex has numerous large buildings filled with exhibits and displays featuring the activities of the Hubble Telescope, International Space Station, Space Shuttle voyages, and more. Visitors can walk the grounds, or take a bus tour.

They also have space-ride simulators and other simulator rides, interactive exhibits, and daily presentations with veteran NASA astronauts. Numerous multimedia cinematic productions give in-depth information on various space projects from visiting Mars to how the Atlantis Space Shuttle was built.

Films can be seen in several different theaters, two of which are IMAX, as well as stand-alone videos, like this one below.

Photo of Earth with ISS in center

Inspiration is the word that came to me most often on the day we visited the KSC. All the courage and genius of thousands of men and women, some who gave their lives, is embodied in this Complex.

This building, below, recently opened in 2016, has the U.S. Astronaut Hall of Fame.

My favorite exhibit houses the entire space shuttle Atlantis, a retired space orbiter that made 33 space missions in the course of 26 years, before it was retired in 2011.

Countdown for that: seven days.