Every single moment of watching lions is a privilege. The pure power of this animal is inspiring. It is easy to see why they are one of the most widely recognized animal symbols in human culture.

They are not, however, really kings of the forest, as the saying goes, because lions don’t live in forests. They live primarily in grassy plains and open woodlands, in sub-Saharan Africa. (See map at end.)

Panthera leo are as ferocious as we are led to believe, and are skilled hunters and scavengers. Even a simple yawn, like in the photo below, has us shaking in our safari boots.

In general, female lions do most of the hunting and protect the cubs; males establish territory and maintain dominance. But there are differences among prides.

Groups of female lions often hunt together. Their prey varies depending on where they live.

In the Serengeti, my favorite place to watch lions, the prides generally hunt the common ungulates: impala, wildebeest and zebra.

During the day you may find the lions under a shade tree, or resting on rocky outcroppings or kopjes (pronounced “copies”).

In Botswana’s Chobe National Park, where large populations of elephants live, lion prides are known to hunt elephants, which is unusual. They target younger, more vulnerable elephants or very old bulls, near Savute.

In the Ngorongoro Crater in Tanzania, one of my favorite places on earth, different animals populate this enclosed crater than on the open plains. For example, no impalas live here.

We watched this lioness stalking four buffalo at the Ngorongoro Crater. She is calculating the energy cost and distance factors here. We waited about a half hour to see what she would do.

She aborted the attempt.

Buffalo seem like an animal not to trifle with….

Lions are heavy animals and relatively low to the ground. They can’t sprint like a cheetah, and they don’t have a big heart for long runs, like a hyena.

Instead, lions take their prey by surprise, the attack is short and powerful. They leap and pounce, pull the animal down by the rump, then deliver a strangling, fatalistic bite to the throat.

Most of the time they hunt at night. Often we would see the effects of a night of lion-hunting at dawn. Successful lions have noticeably full bellies, and are often seen lazing beside a water hole, or sleeping. Other lions might be licking a gash or nursing a wound.

At night we heard big booming roars that electrified the vast darkness. Roars can be heard from five miles (8 km) away.

This fully mature male shows signs of numerous fights on his scarred face.

Lions are also great scavengers. They will saunter onto a kill site where other animals are avidly engaged in devouring a dead animal and take over, as if it was theirs all along.

They will frequently respond to hyena calls, arriving at the scene of a hyena’s fresh kill. But hyenas are formidable and ferocious animals, too, and are not easily bullied, even by lions.

Lions are the only wild cat to have a social structure, and it is fascinating. Pride hierarchy differs from venue to venue, and local safari guides are always very familiar with each pride and its individual members. Guides enthusiastically tell you stories about the lion family as if it was their own flesh and blood.

With their piercing golden eyes, confident swagger, and feline agility, lions continue to be one of the most majestic animals on this planet.

All photos in the wild by Athena Alexander. 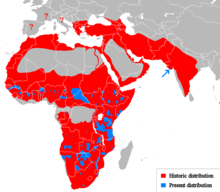 Lion populations continue to decline, mostly due to humans. If you are concerned, you can start by visiting here: African Wildlife Foundation on Lions