The tallest terrestrial animal in the world, giraffes live only in Africa. Depending on where in Africa you are, their coat patterns differ. See maps and diagram at end.

This subspecies, in the two photos below, is known as the reticulated giraffe (G. c. reticulata). They get my vote for the most elegant-looking subspecies. It is named for its net-like, or reticulated, coat pattern with reddish-brown patches separated by white lines.

I am always thrilled on safari just to see a giraffe. It was long after my first giraffe sighting that I started to notice they were different from one another, depending on where we were.

Compared to the reticulated giraffes we saw in Kenya, above, look how different this pattern is on the South African giraffe (G. c. giraffa), below. The spots are more jagged. This individual has several oxpecker birds on its back, eating the ticks.

Taxonomist hypotheses and genetic studies abound on which giraffe subspecies lives where, it has to do with mitochondrial DNA.

Thornicroft giraffes (G. c. thornicrofti), in the next three photos, have spots that are more notched. They are a race found in the Luangwa Valley in Zambia.

We were thrilled to come upon this mother and her two nursing calves, especially since there are less than 600 individuals left of this subspecies on the planet.

When you come upon a giraffe they have always, 100% of the time, seen you before you see them. With their height comes perspective, an advantage in the African veldt where giraffes have many predators.

Here are two photos below of the South African Giraffe subspecies, G. c. giraffa. This first photo gives you a good idea of the giraffe’s height. They stand 14-18 feet (4-5.5 m) tall.

In addition to the subspecies coat variations, each individual has a unique pattern. Calves inherit some spot pattern traits from their mothers. There are many theories on the evolutionary purpose of the spots, including camouflage and thermoregulation.

We saw this pair of Masai Giraffes, G. c. tippelskirchi, in the Serengeti in Tanzania. They have jagged star-like blotches that extend all the way down to the hooves. The male, on the left, is darker due to age.

Often one sees giraffes browsing, and it is usually on an acacia tree. They have a tough tongue that can master the acacia’s long, sharp thorns.

This tower of giraffes, however, are clustered under a mighty baobab tree, with no possibility of reaching the canopy.

There are so many remarkable aspects to the giraffe, their unique coats are only the beginning. And their perspective, hmmm, what a gift.

Written by Jet Eliot.
All photos in the wild by Athena Alexander. 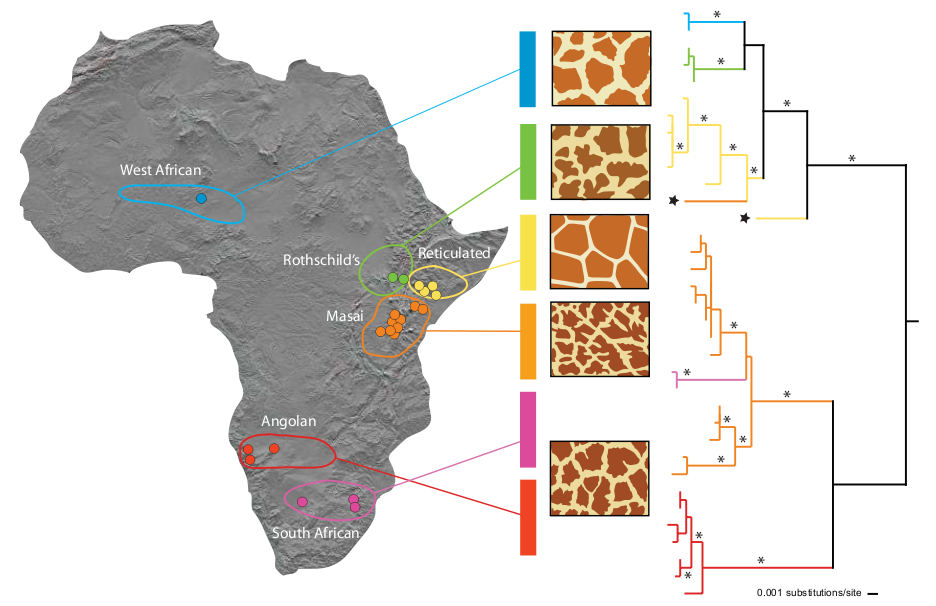