Among the many extraordinary talents of the hummingbird, the male’s aerial dive is the most astounding of all. A courtship dance, the hummingbird dive is happening right now in the northern hemisphere.

It is an electrifying display, even to us mere humans.

This week in Northern California, I heard or saw it at least a dozen times every day. In colder areas, it probably hasn’t begun yet.

Anna’s Hummingbird, female on the left, male on the right, California

Once he has her attention, he starts the dance. It usually lasts about 12 seconds.

Next, he flies straight up into the sky, and he keeps going higher and higher, until you barely see him.

Then he plummets, swoops down right in front of her, in a flash. They’ve been clocked at 50 miles per hour (80 kph).

In this photo, below, he is diving downward. You can see his bill pointed down.

If you’re standing there, it looks like he’s going to collide with the ground. I have gasped plenty of times, afraid for the bird’s safety. But hummingbirds are known for their precision flying.

And then at the last moment, he flairs his tail, lifts up and sails skyward.

Also at this moment, his two outer tail feathers vibrate together making a distinct popping sound. The speed is so great, that the wind vibrates the two feathers together.

Often his iridescent gorget (throat) feathers light up, too. And he starts singing his heart out.

In the Anna’s Hummingbird species, this aerial dive is called a “J” dive, for the flight pattern that looks like the letter “J.”

Every hummingbird species has a slightly different dive style. The ruby-throated hummingbird, prevalent in the eastern half of the United States, does a “U” shaped dive; so does the broad-tailed hummingbird. See diagram at end.

We saw this dazzling male Costa’s Hummingbird in Palm Springs. Although we didn’t witness the courtship dive (it was February), I’ve read their dive is similar except they hurtle off to the side of the female and twist, to direct their sound.

The sound effects during this dive also vary among species. Recordings of six aerial dive sounds.

Sometimes in the heart of winter we will have a day or two of uncharacteristically warm weather. In this pseudo spring, the male will perform his impressive dive, thinking it’s breeding time. They are also known to use the dive for territorial purposes.

Many times I have watched the female fly away while he was performing the dive. Consequently, in mid-flight, he aborts the dive. It takes a lot of precious energy to do this dive, and he has decided to conserve.

There are YouTube videos on this, but they don’t really capture the speed, because they have to be done in slow motion to even see the bird. The dive is supersonic fast and nearly impossible to record. Here’s one of the better videos, in slow motion.
YouTube Anna’s Hummingbird Dive by Chris Clark.

During this season when hummingbirds are getting together to breed, keep your eyes and ears open for this spectacular performance. It happens fast, so you may have to watch it a few times.

Glory and beauty in the world of nature: you have to be ready. 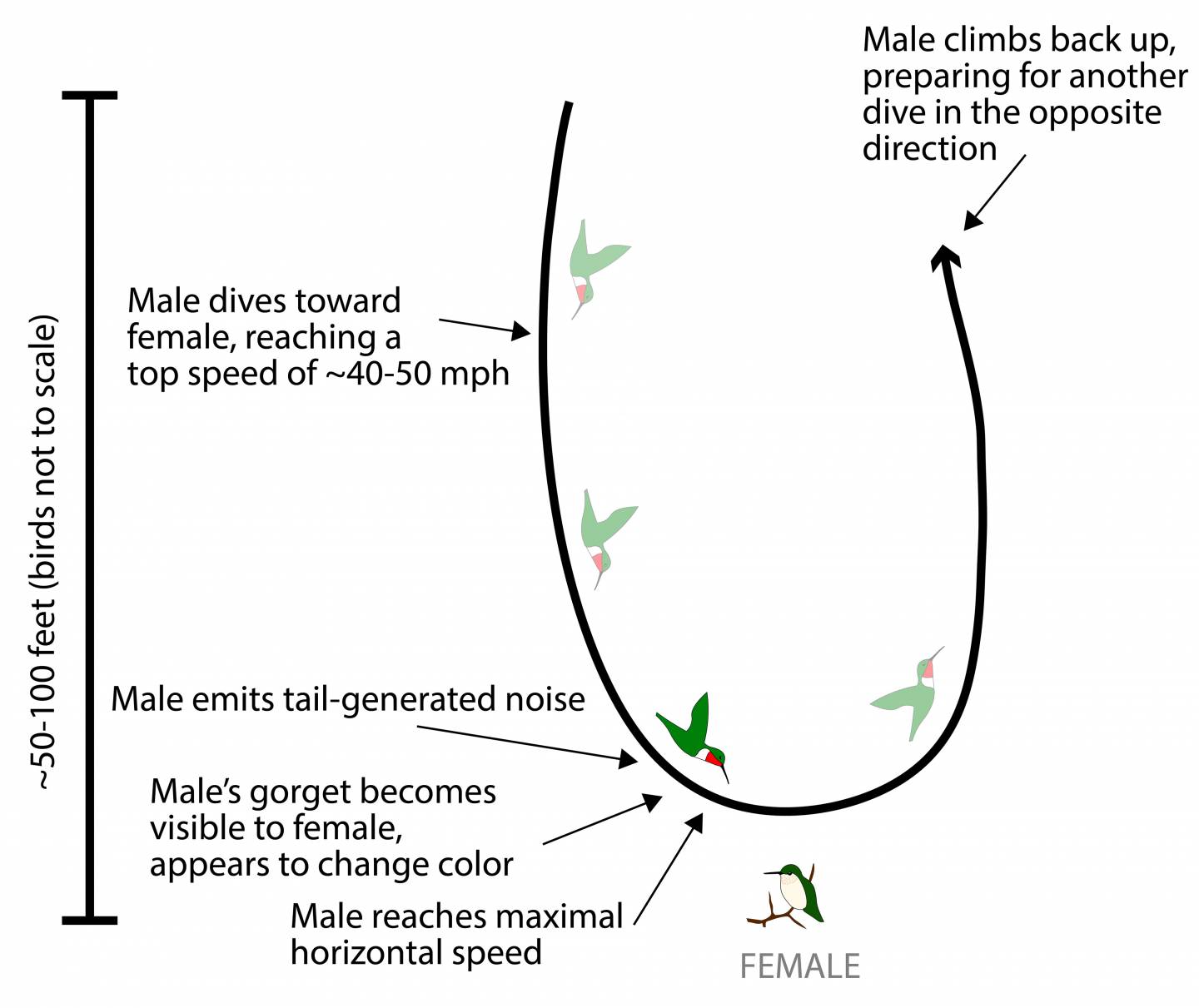 84 thoughts on “The Hummingbird Dive”