With spring and Easter emerging in the northern hemisphere, the prospect of new birds, new life, surrounds us. Here’s a look at bird eggs.

Having volunteered for several years counting nests for a local bird study, I became adept at finding bird nests. Birds build nests to be hidden, to protect their broods from predation, and it is vital that nests and eggs remain untouched and hidden. All nests photographed here have been treated with careful and knowledgeable respect. 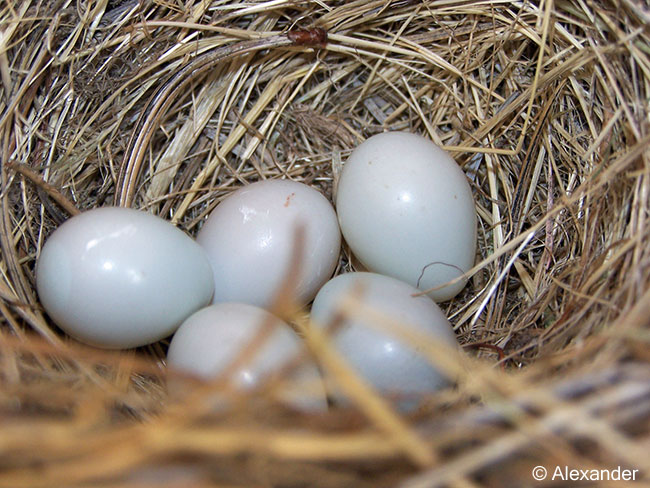 There are over 10,000 bird species on our planet, so the variation in eggs and nests is vast. Each species has its own method for building a nest and laying eggs, and, additionally, there are variations within each species.

Egg shapes, colors, and markings vary widely. Below is a guide for the basic egg shapes and markings.

This little bird came out of a brown-spotted egg–first day of life.

There is also a wide range in egg sizes. The smallest eggs are those of Hummingbirds, while Ostriches have the largest. Approximately 5,500 Hummingbird eggs would fit inside one Ostrich egg (Handbook of Bird Biology, Cornell). 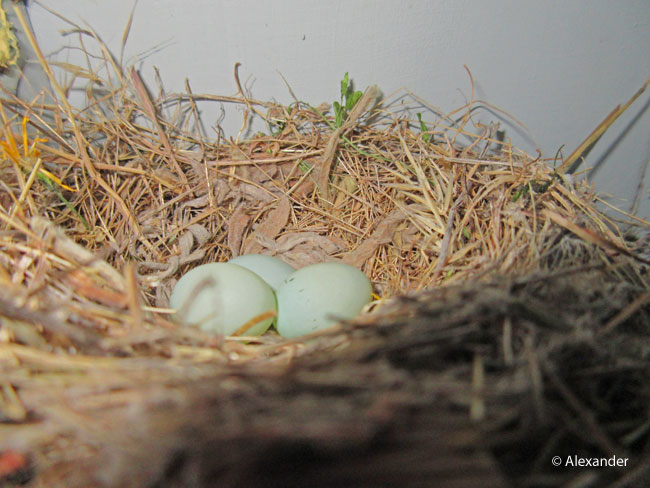 With endless variations in bird eggs, only two things are constant: all eggshells are porous, and all are laid by females.

Eggshells are covered with minute pores allowing air to reach the embryo inside.

Inside the egg is an entire universe. Membranes, fluids, and yolk provide nutrition to the embryo, which rotates and floats throughout incubation. Once the embryo has grown to full size, the bird uses its “bird tooth” to break through the shell.

A clutch is the total number of eggs laid by one female in one nesting. The clutch size varies among species, as does the number of times in one season a bird will lay a new clutch.

Bird egg experts, or oologists, collect extensive data. These days, unlike in the 19th and 20th centuries, experts do not collect the eggs, just the information. The egg chart below, and information in the next paragraph, are from an easily accessible field guide.

Detailed data on the Western Gull, for example, says this species can lay 1-4 eggs in a clutch, typically 3. Eggs are laid every other day. Usually the female does the incubating, and it takes 25-29 days, typically 26.

We spotted this Western Gull incubating on a coastal offshore island while cormorants, oystercatchers, and pelicans clamored about. I think she was having a tough day.

For many consecutive years, several pairs of Pacific-slope Flycatchers (songbirds) built nests near our front and back doors. Sometimes a pair produced two clutches in a summer, sometimes one, depending on the weather and other factors.

When it was time, the eggs would usually hatch one per day. But not always. One spring we had a frigid cold front come in. The Flycatchers’ eggs stopped hatching until the cold spell ended, and then resumed when it warmed up a few days later.

In our northern hemisphere, numerous bird species are in some stage of breeding or nesting right now. Miracles are happening all around us.

In tropical locations, this often goes on year-round. We spotted these Caciques nesting in February in Trinidad.

Just before incubation time, most parent birds develop a brood patch on the ventral, or underside, of their body. While feathers are designed to insulate the bird, during incubation when it is essential that the parent’s body radiates warmth to the egg, a small, featherless patch develops to provide an abundant supply of blood vessels.

Waved Albatrosses in Galapagos do not build a nest, but just move the egg around.

Similarly, Blue-footed Boobies do not have brood patches. They use their feet to keep the egg warm.

Oval or spherical, spotted or pale green, big or little, pigments in the oviduct, brood patch and clutch — who knew the egg could be so eggciting?

Three photographs of the same Mute Swan with her eggs, and then cygnets. 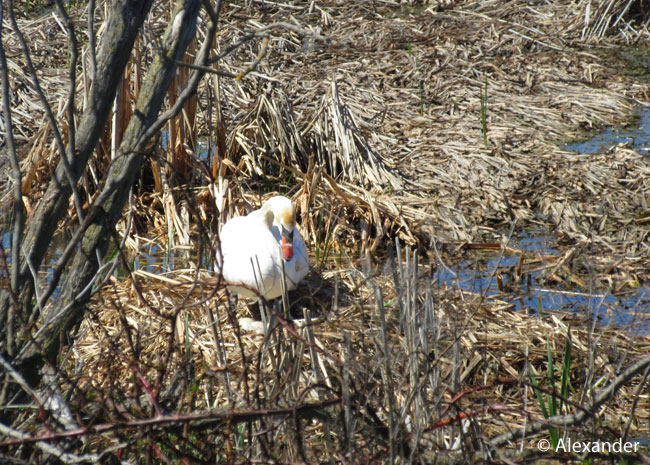