Here’s a place I have heard about my whole life. Catchy name. I got to visit it this past November, and it is as unusual and quirky as it’s name…and far more exotic and beautiful than I had ever imagined.

The Okefenokee Swamp is a peat-filled wetland that straddles the U.S. Georgia-Florida border. A vast and shallow bog, it covers nearly a half-million acres (177,000 ha). In ancient times it was part of the ocean floor.

There are hiking trails, a self-guided auto tour, an observation tower, camping, and more. But being on the water is decidedly the best way to experience the Okefenokee.  You can rent boats, take your own out, or pay for a boat tour.

We took the guided 90-minute boat tour, and it was excellent.

Alligators peered out from beneath the water’s surface.

It is the largest blackwater swamp in North America. The water is characteristically slow-moving, filtering through vegetation and decay, resulting in tannins that make the water appear black.

Blackwater generally has less nutrients and more acid, hosting flora and fauna different than you see around fast-moving water.

The cypress trees (Taxodium ascendens) (pictured above), rooted in water, have a curious bulbous base that assists in stabilizing the tree.

Trees living in water:  not something we see very often.

Surrounding the cypress trees are woody projections, tapered stumps, called “cypress knees.” These are part of the cypress root system thought to provide the tree with stability as well as oxygen.

The guide steered the boat down the long man-made Suwannee Canal, as we suspiciously eyed the alligators, kept our limbs and digits well inside the boat. Monarchs fluttered along the shoreline, turkey vultures soared overhead, woodpeckers and blue jays dipped among the trees while catbirds shouted their mewing calls. 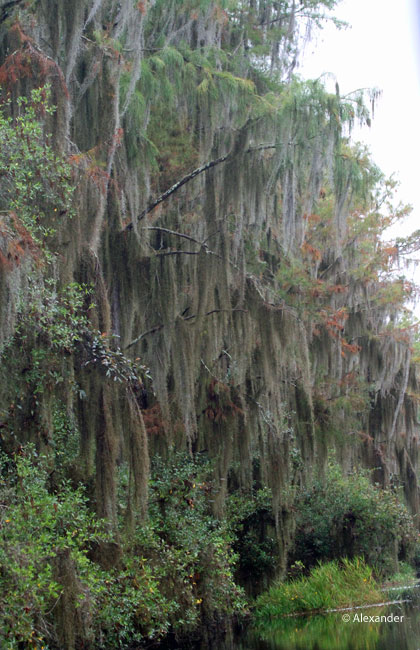 I studied the faces of canoeists as they glided by, admired their calm as they paddled through the black, alligator-studded water. 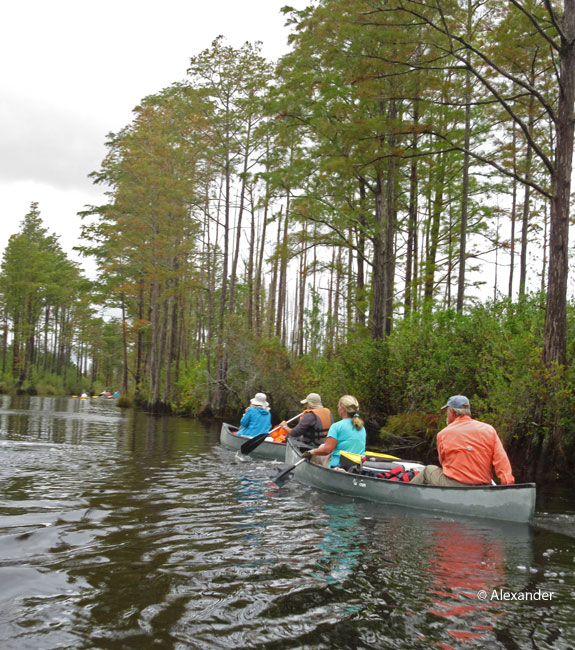 After we left the main channel, we headed into the Chesser prairie. There are many wetland prairies, or open landscapes, in the Okefenokee and they’re all named.

Wading birds like ibis, egrets, and herons dotted the landscape.

In addition to the abundant water lilies (Nymphaea odorata), clumps of pitcher plants (Sarraceniaceae) could be seen in a few places. A cobra-shaped carnivorous plant, it eats and digests insects.

Its sweet nectar entices the insect in while the waxy inner surface traps the insect, who then drowns in the inner chamber.

The history of the Okefenokee is an interesting one, home to Native Americans and white settlers in earlier centuries. Toward the beginning of the 20th century, opportunists embarked on draining the swamp and harvesting the cypress trees for profit.

Fortunately for us, by 1937 the area became protected.

In some parts of the Okefenokee there are small islands, called batteries, that you can see floating by.  About the size of a desktop or larger, they are made of decaying organic matter called peat that originates on the swamp floor and floats to the surface.

“Okefenokee” is a Native American word of Seminole origin that means “The Land of the Trembling Earth.” It is believed that the long-ago Native American residents probably walked on those floating batteries, and experienced trembling.

Trees and flowers that live in the water. Plants that eat insects. Mammals that eat humans. And black water wherever you look.

The Okefenokee Swamp is marvelously unique. 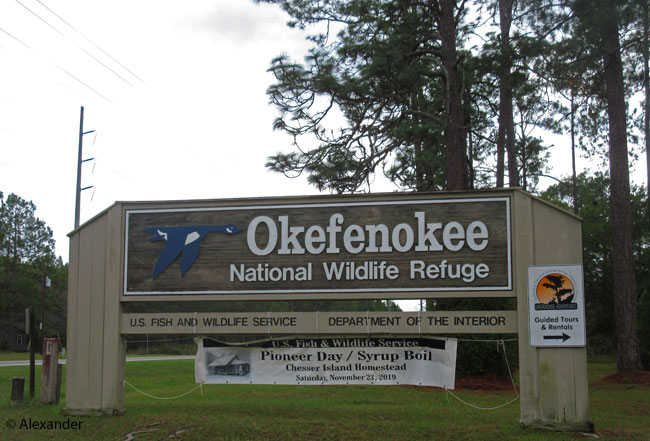 104 thoughts on “The Okefenokee Swamp”