I had the privilege of hiking two different trails while visiting the Pacific Northwest’s Columbia Gorge recently. The trails were on opposite sides of the Columbia River, in two different states.

Bridge of the Gods over the Columbia River

On the north shore of the river is the state of Washington, the south side is Oregon.

With the helpful emails and posts of fellow blogger and PNW hiker John Carr, both hikes were awesome, and the book he suggested, Northwest Oregon by William L. Sullivan, was great. His website, johncarroutdoors.com, is dedicated primarily to PNW hikes.

The first day, Athena and I hiked the Falls Creek Falls trail in Gifford Pinchot National Forest in Washington, named after the first Chief of the United States Forest  Service. This trail was enchanting due to dynamic Falls Creek that was present every step of the way. Sometimes the waters expressed a calm chattering, other times, passionately raging.

Two exquisite footbridges aided us as we traversed the trail.

After marveling at the footbridge engineering and enjoying  many unfamiliar plants along the way, we hiked further and discovered the old-growth trees. 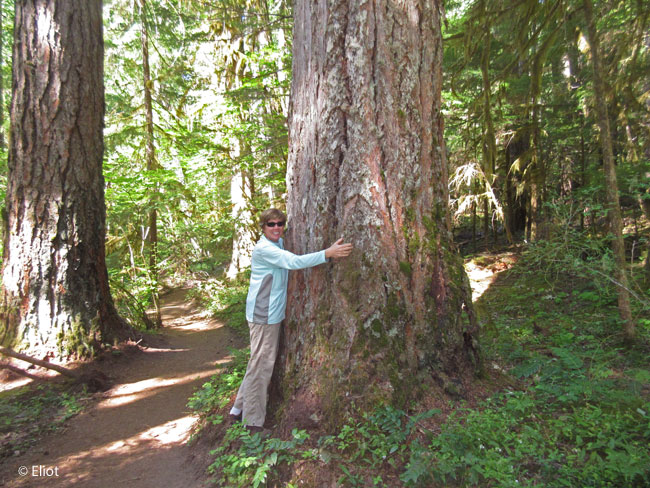 Athena demonstrating the size of the old-growth Douglas Fir tree

I always enjoy hiking on familiar trails, observing each new season with appreciation, and warmly greeting the trees, plants, and wildlife as the old friends they are.

But it’s also really fun to be in a completely new forest, especially when it is a winner. Each turn of the path yields a new surprise…mystery and adventure.

As we continued along the trail, the sound of the water gradually increased until it was so loud we could no longer hear each other speak…and then, through the trees, we were astounded to see the crashing waters high above us.

The guidebook’s author described the waterfall perfectly: “The 3-tiered cascade starts with a hidden 50-foot falls, spreads across a 70-foot fan, and finally thunders 80 feet into a rock punchbowl.”

We had lunch at the waterfall, and headed back, completely satisfied and happy for the magic we had experienced.

The other hike occurred a day later in Mount Hood National Forest in Oregon. The High Prairie Trail on Lookout Mountain.

As we ascended, we came upon a few meadows, like this one. Although is was late August, there were still wildflowers. 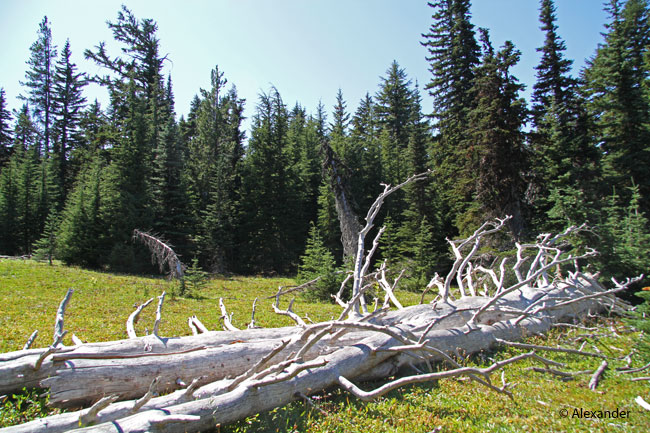 As we continued, we were rewarded with breathtaking views of the Cascade Mountains and the Columbia River Plateau.

That day it was 90 degrees F. (32 C.), so we stopped a few times in the ascent, finding rocks to sit on and marveling at the quiet magnificence.

More surprises prevailed as the close-up views of Mount Hood just kept getting better and better.

There is no place in the world like the Pacific Northwest with its endless waterfalls, gorgeous trails, and sweeping mountain vistas.

79 thoughts on “Hiking the Columbia Gorge”