There are approximately 330 species of hummingbirds in the world, they’re found only in the Americas. One of the most remarkable birds on this planet, they are in the Trochilidae family.

Some hummingbirds migrate, some do not.

In northern California, my home, we have one resident species, the Anna’s Hummingbird, who stays all year long…even when there’s snow.

Fortunately, we also have the divine pleasure of observing several of the migrating species passing through in spring and autumn. And in tropical countries, there are numerous species any time of the year.

They wear a kaleidoscope of colors, and some are especially dazzling. Many have prism-like cells in the top layer of feathers that, through pigmentation and refraction, give the effect of iridescence.

Some also have punk hairdos and psychedelic markings, like this male tufted coquette.

Not all hummingbirds have the word “hummingbird” in their name. I guess after trying to name 330 different species, they ran out of words. By reading the names of each hummingbird in the photos here, you’ll see what I mean.

The booted racket-tail, below, is named for his racket-shaped tail and furry (orange) boots.

Their unique flight skills out-perform all other birds. They move forwards, backwards, sideways, straight up, and are exquisite at hovering too.

Also, they have incredible speed. North American hummingbirds average about 53 wingbeats per second in normal flight.

They can dive at speeds of up to 60 miles per hour, and average about 20-45 miles per hour in normal flight. They are named for the humming sound created by their fast-beating wings.

With special retinas, they can see as they zoom. A hummingbird’s tongue is also noteworthy.

If you have good eyesight, binoculars or camera lenses, sometimes you can actually see the tongue extended outside the bill. You may notice how long it is.

Hummingbirds, and woodpeckers too, require long tongues to extract food. In the hummingbird’s case, they use their long, forked tongue to reach into tubular flowers for nectar.

A recent discovery has revealed that both parts of the forked tongue hold tiny tubes. When the bird unfurls its tongue into the nectar vessel, the tubes open up, draw the nectar, and then lock shot, capturing the liquid for the hummingbird to ingest.

The hummingbird’s tongue is so long that it wraps around the inside of the skull.  They have a special bone, called the hyoid apparatus, that guides the tongue to reach over, behind, and under the eye.

We once had a hummingbird nectar feeder that adhered by a suction cup to the window. By standing inside the building and looking out the window at the feeder, we could see the hummingbirds mere inches away. As the bird would drink sugar-water from the feeder, you could actually see the crown of the head pulsate where the tongue was operating.

They fly like a bullet, glitter like sequins, and dance in the flowers — an avian work of art. 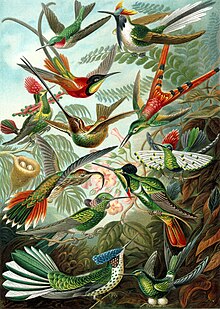