It is estimated there were once 20-30 million wild bison in North America. Habitat loss and unregulated hunting brought the numbers down to 1,091 individuals by 1889. Today in North America, after over a century of regulation and protection, there are approximately 500,000.

The herd of which many of us are familiar are the Yellowstone bison, seen in these photos. They total approximately 5,000 individuals; and are the only free-range bison population in the U.S. who ancestrally date back to prehistoric times.

It is extraordinary that any bison exist today after the relentless slaughter in the 1800s.

There is a lot of information about the near-extinction of this mammal, and the heroic recovery; many sub-species, different herds in the U.S., and in-depth research about the American bison.

Yellowstone Bison from the National Park Service offers a thorough look at the current herds in this park, including a 2:52 minute video of a just-born bison calf.

American bison are creatures of the prairies. Nomadic grazers who travel in herds, they eat grass, weeds, and other plants. Herbivores with an average weight of 1,000-2,000 pounds (453- 907 kg), you can imagine how much grass it takes to satisfy a bison’s belly. They spend 9-11 hours a day eating.

When we were in Yellowstone in September, 2014, some of the bison’s coats were shaggy. Their bodies were preparing for the brutal Wyoming winter months ahead. They have two coats: a heavy one for winter, a lighter one for summer.

Shedding bison in back, Yellowstone NP

Also in winter, the bison come down out of the higher elevations to the valleys, where they can generally find more food. See diagram at end.

I like this winter note: the bison’s humpback design, with large spaces between certain vertebrae, allows them to use their head as a snowplow. Swinging their head from side to side, sweeping away the snow, they can reach the grass even in the coldest seasons. 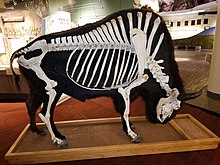 All traffic stops in Yellowstone for the bison.

Sometimes they meander so close to the car that you can hear them breathing. I found it so intimate, hearing the deep, labored breath of this behemoth.

A huge animal that exists on mere grasses, still roams the prairies after millennium, adjusts its wardrobe to the season, and thrills visitors from around the world. That’s a remarkable animal. 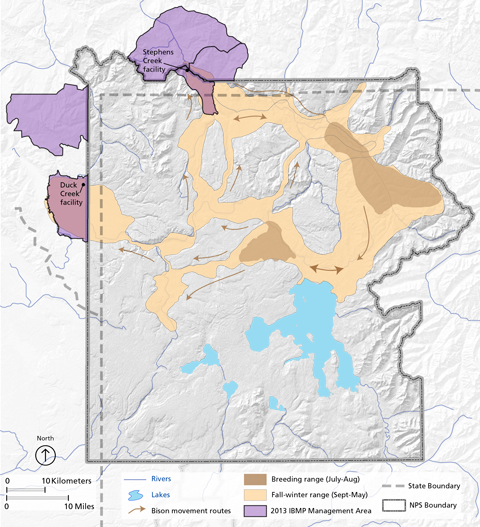