A modern invention of the 1820s that revolutionized the science of light and shipping was the Fresnel lens. This invention, created by Augustin-Jean Fresnel (1788-1827), is a lens with an array of prisms capturing light and extending its reach. Today we are still influenced by these lenses around the world.

Fresnel (pronounced fray-NEL) lenses were originally created as a solution for the tragic ship wrecks that were prevalent in the 1800s. Ship captains, sometimes unable to see coastal waters due to low light, crashed their vessels into the reef with disastrous results.

Light naturally diffuses in all directions. Finding a way to cut down on this diffusion was the challenge for many years. At the time, shiny metal reflectors around the light source (oil lamps) were used to enhance the light, but this only gave about 50% reflection.

Although I have been to many lighthouses, I never regarded the light as anything special. Then last year I was in the Visitor Center at a California State Park, Angel Island, and became instantly dazzled by a waist-high glass piece mounted on the floor. It had once been used in the lighthouse on Angel Island, and was on display.

It captured the light of the room in the most extraordinary, and beautiful, way. I’ve been a fan ever since.

Vashon Island, WA Lighthouse. You can see the Fresnel lens in the tower through the windows.

There are numerous aspects that make the Fresnel lens unique and effective:

The first lens was installed in 1823 off the west coast of Fresnel’s home country, France, near Brittany, a land long-known for its rugged coasts. Here there were treacherous reefs that tragically and repeatedly snagged and destroyed ships. The new lens was a success.

Early innovations began in France and Scotland, with America and other countries following. Chronology of Fresnel Lens Development.

Each lens was produced in brass-framed sections and could be shipped unassembled from the factory.

They were made in six different classifications, or orders. A 1st order lens is the largest size, at approximately 12 feet high (3.7 m), lengthening the light beam 26 miles.

Here is a cross section of the Fresnel lens (on left) compared to a conventional lens of equivalent power (on right). 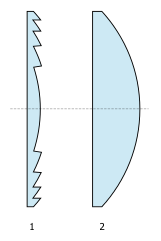 Lighthouse beacons have been  significantly modernized since the 1800s, but there are still lighthouses with Fresnel lenses–some in working order, some just on display. There are also many Fresnel light-refracting techniques in use today: spotlights, floodlights, railroad and traffic signals, camera and projector lenses and screens, and emergency vehicle lights.

Many photographers and artists, including myself, hold a deep fascination and reverence for the miracle of light. How fortunate for us to have had Fresnel’s engineering skills to brighten this further. 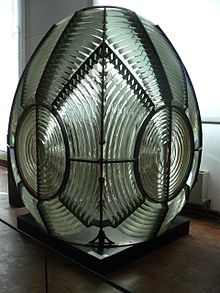 87 thoughts on “The Remarkable Fresnel Lens”