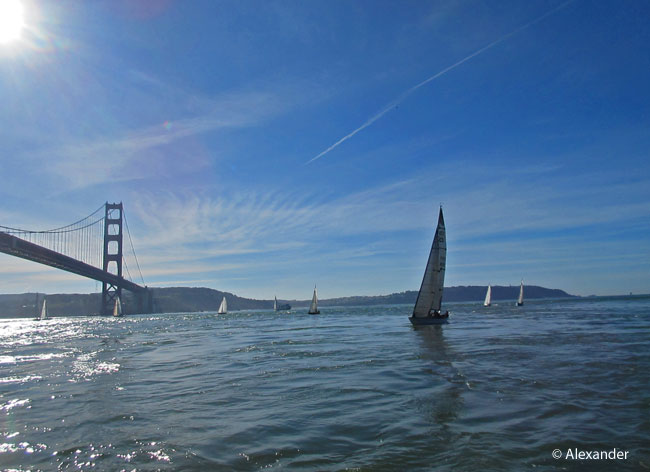 Crossing the Golden Gate Bridge is always notable no matter how many times you’ve experienced it. Another extra special delight is going under the bridge.

Public tours, private charters, and privately-owned watercraft cruise beneath the orange span every day. Tourist or resident, we all like to visit the waters under this famous bridge.

I was on a birdwatching boat recently on the San Francisco Bay. Even though it was January, we had lucked out with the weather and the waters were calm and the sun was bright. Coastal bird flocks were our destination.

While still docked, the guide said, “I have a surprise for you.”

We were a boat-load of birders heading out to see what the herring were attracting. What could be more exciting than this?

“The Captain says the water is calm enough, we can go under the Golden Gate Bridge today.”

When you’re on the bridge there is one prevailing sound: the traffic. Six lanes of fast-moving traffic and a constant thu-dud…thu-dud…thu-dud of vehicles speeding across the highway grates. It’s wonderful.

But when you’re under the bridge, all you hear are the wind and the water.

Harbor seals relaxed in the sun near their prime-real-estate beach caves. Western grebes, black oystercatchers, and western gulls were busy all around us. 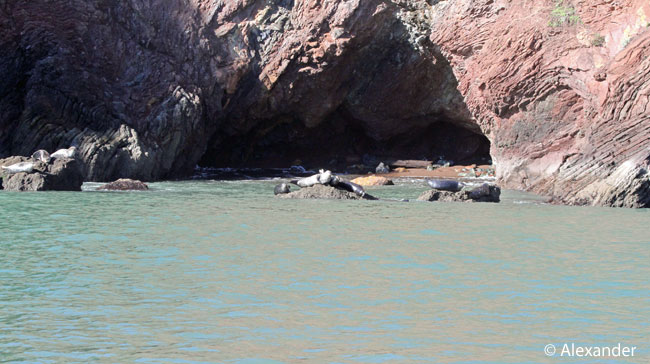 The water under the bridge is turbulent, and there are always warnings to beware. The majority of the under-bridge adventurers are experienced boaters, but sometimes a few reckless individuals are there to catch a thrill, too.

Surfers at the Golden Gate Bridge 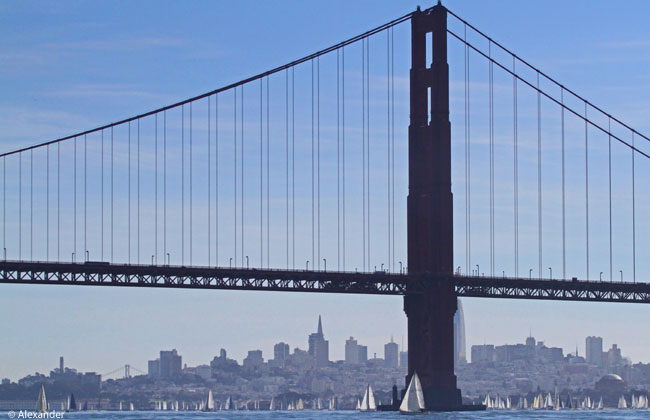 There are many factors here at the conjunction of the San Francisco Bay and Pacific Ocean that make the water dangerous.

There are two different kinds of water. The Bay water is runoff from the surrounding land, it is earth-warmed and carries silt. Contrastingly, the Pacific Ocean is cold, nutrient-rich water stirred by upwellings and tides. The two different water types clash here and funnel through a narrow land constriction, thereby creating a tumultuous disturbance.

In addition, underneath the water is an ever-changing sea floor. Tectonics, dredging, tidal currents, and many other alterations have re-shaped the underwater landscape year after year. U.S. Geological Service images, click here.

Black Oystercatchers more interested in barnacles than the Bridge

Defunct military forts stand at each end of the Golden Gate Bridge, these are also good spots for getting a close-up underneath view. Fort Point and Fort Baker.  Both are listed on the National Register of Historic Places.

If you have ever visited this iconic bridge, you know the specialness to which I refer. We each leave a little bit of our heart in San Francisco.

120 thoughts on “Underneath the Golden Gate Bridge”