Big Sur is a region of coastal central California. Originally named by the Spanish, it translates as “the big south,” and anyone exploring it experiences the vastness.

It is an endless pleasure to live relatively close to Big Sur. We take road trips every few years, visit favorite spots, and try new ones, too.

It is a popular tourist destination. The only road, Highway 1, winds through the mountains along the jagged Pacific Coast, taking Big Sur visitors past sparkling ocean vistas and miles of protected, undeveloped land.

Although opinions differ about what exactly is Big Sur, it is generally thought of as the  Highway 1 area between Monterey and San Simeon, an expanse of about 80-100 miles (129-161 km). There are forests and parks inland too.

The Big Sur coast is the “longest and most scenic stretch of undeveloped coastline in the [contiguous] United States.” (Wikipedia). More Big Sur info here.

But eventually the highway was built among the precarious, ever-moving mountains; completed in 1937. Convicts built it.

Some part of the highway is almost always closed, due to rock or mud slides. There is a section closed now, a result of recent storms. The Pfeiffer Canyon Bridge collapsed. (See photos at the end.) If you are planning a trip, look up road closures here.

Some of the frequently visited spots include coastal towns like Monterey and Carmel, and the Hearst Castle in San Simeon. 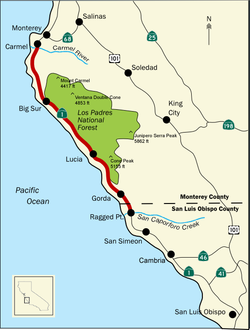 In between these human places lie pristine beaches loaded with elephant seals;  migrating whales cruise by, and the cool, coastal waters are abundant with marine mammals.

There are also many bird species including the critically endangered California Condor.

My favorite place to go is Point Lobos. It is a state nature reserve with trails, wildlife, an underwater marine sanctuary, and dynamic tide pools.

We often spend about two days exploring Point Lobos and then we’re back on the road again, heading south down the coast. I’ve enjoyed many boat rides on the Monterey Bay, too.

Each day is usually a long one, with many different adventures. The wind off the Pacific can be strong, and there’s often fog.

Whatever we did that day, at the end of it, when I finally close my eyes and the sea sounds start to fade, I find I’m giddy about what the new day will bring.