As the second largest order of mammals (after rodents) with over 1,200 species, bats represent 20% of all mammals worldwide.

Last month, while lodging at Asa Wright Nature Centre in the rainforest of Trinidad, my partner and I had the thrill of watching a bat emergence every night.

At first glance they looked like brown birds at the nectar feeders. They swooped in and out so quickly, we didn’t know what they were; but soon it became apparent.

The next night Athena was photographing with the last light of the day, when she discovered where they were coming from. In a matter of minutes, dozens and dozens of bats were emerging from a narrow basement corridor underneath our lodge.

She came and got me, and we watched for 20 minutes as they stopped at the feeders, drank, and flew off. We estimated we saw over a hundred bats.

The next night we went early, in order to see them before they came out. And then like clockwork they began flying out of the basement corridor–five or six, then five more, ten more. They left the lodge structure, drank at the feeders, then disappeared into the night.

Using echolocation, or biological sonar, they emit calls (we humans cannot hear) that produce echoes. The echoes help the bat to locate and identify objects as they navigate.

We were standing about 12 inches (30 cm) apart, when one bat zoomed between us. It was so fast that I didn’t see it, but I felt the breeze on my left ear.

Athena said, “They didn’t fly like this last night. They went more directly to the feeders.”

“Maybe we’re in their way.”

So we stepped back two steps, and instantly the bats’s flight patterns changed; they headed more directly to the feeders.

Once we all had our proper place in the world, Athena and I watched while the bats continued emerging, quickly and in abundant numbers.

This species is the Pallas’s long-tongued bat.  Glossophaga soricina have the fastest metabolism ever recorded in a mammal, very similar to a hummingbird. Over 80% of their energy comes directly from the simple sugars of nectar. 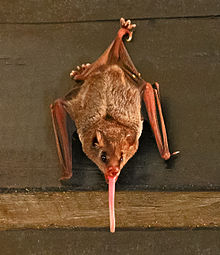 Interestingly, the long tongue of this bat has a mopping ability powered by blood. Elongated hairs at the tongue-tip trigger blood vessels, immediately increasing the length of the tongue by 50%, thereby expanding the bat’s ability to consume more nectar.

How does it feel to have dozens of long-tongued bats zipping around you?

It was a little intimidating at first, but after that…it was heavenly.

93 thoughts on “Enjoying the Bats”