Red’s Java House is a San Francisco waterfront restaurant that opened in the 1930s, serving breakfast to the longshoremen and sailors.

In a city where the ruthless competition for Michelin star ratings and world-famous chefs never ends, there are plenty of eateries you can go to for the most delectable food.

Red’s is not one of them.

Patrons go to Red’s for old San Francisco ambience, a bit of the bay, or a rowdy double cheeseburger and beer before the Giants game.  I don’t think there’s a big to-do about the java either.

Located on Pier 30, Red’s Java House started out as Franco’s in the 1930s.  In 1955 the namesake owner Red McGarvey bought it with his brother.  There have been many owners since, but the name has not changed.

In fact there is very little about Red’s that has changed over the decades.  That is its charm.

The interior is loaded with San Francisco memorabilia and ornery posters.

There’s only one bathroom and the kitchen is tiny.

It survived the longshoreman waterfront strike of 1934, and a big waterfront fire in 1984.  It also survived the 6.9 earthquake of 1989, serving coffee the next day despite no electricity.

After that, the nearby Embarcadero Freeway was torn down due to earthquake damage, and Red’s was suddenly valuable waterfront real estate.  The neighborhood began to change.

Red’s survived the gentrification too.

While the surrounding neighborhood turned into hipster restaurants and expensive condos, and working ships were replaced by cruise ships, the little shack on the bay continued attracting old regulars and famous San Franciscans too (like 49er greats Joe Montana and Jerry Rice).

One morning I was near there at 5:00 a.m. for another San Francisco tradition–the 1906 earthquake anniversary. I was doing research for my new novel, Golden Gate Graveyard, due out next month.

Afterwards, there was no place more appropriate for a San Francisco breakfast than Red’s Java House.  The sun was rising and putting on a show outside the Java House window; the bay was calm, gulls were squawking.

San Franciscans of old and new visit Red’s with a smile on their face, happy to see this spirited restaurant still exists. We take in the briny sea air and bellowing fog horns, and enjoy this crusty old shack. 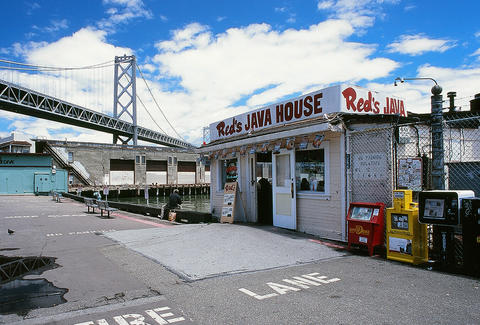