Located in Wyoming, this mountain range began forming 6-9 million years ago.  The Tetons are the youngest mountains in the Rocky Mountain range.

It is a unique mountain range due to its formation, and we had a mountain experience of an unusual nature.

A series of geological processes over millennium eventually led to the uplift of the region.  Situated on the Teton Fault, approximately two million years ago earthquakes displaced the range.

Most mountain ranges have foothills which often obscure much of the mountain.  But here the eastern side arose so quickly and sharply that there are no foothills.  In addition, the older the range is, the more eroded the peaks become.

But this range has no foothills, and is relatively young, creating high, craggy peaks that are prominent and stunning.

Visiting the Grand Tetons, only ten miles south of Yellowstone National Park, is an unforgettable experience because the mountains are always looming in your presence.

The geological mysteries one encounters while hiking or even driving in the valley are endless.

Mountain climbing is a favorite sport where 4,000 climbers a year attempt to summit the highest peak.

Although I enjoyed lovely hikes and wildlife adventures here, the most unique moment was when we got caught in a thunderstorm.

Halfway through dinner at the Jackson Lake Lodge, gusting winds and angry dark clouds began brewing.  By the time we finished, a thunderstorm was close to erupting.

It had not started raining, so we decided to walk back to the cabin ahead of the storm.

Outside it was so windy that fir trees were bent over sideways and pine cones had turned into horizontally flying missives.

A few sprinkles came down and then a CLAP of thunder exploded just as lightning hit, and our entire universe turned opaque white.  I remember seeing my shoe reach the steps…and then it disappeared.

We had been caught in a lightning strike.

How strange it was to be on earth with eyes wide open, and yet not seeing anything.  White out.

Fortunately it didn’t hit us directly.  We looked around in disbelief; no one had been injured.  No fires either.

It rained for about ten minutes and then the storm vanished, as quickly as it had arrived.

Whenever I am in the presence of a foreign mountain range, it is fascinating to see the weather system that each individual range produces.  That day the Grand Tetons showed their grandeur. 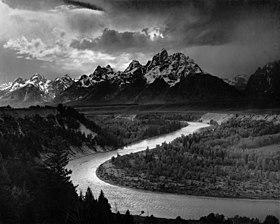 74 thoughts on “The Grand Tetons”