As the capital and most populated city in the Netherlands, Amsterdam is a spirited and unique city.

It is popular among tourists for many attractions:  museums, canals, the Anne Frank house, the red-light district, tulips, and cannabis coffee shops, to name a few.

This is a city of deep history, starting as a fishing village in the late 12th century, developing into one of the world’s most important ports in the 17th century, the Dutch Golden Age.  Today the region is a modern metropolitan center and cultural capital with a population of approximately 2.5 million.  Click here for more info. 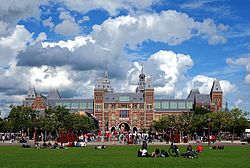 There are so many museums it was impossible to see them all in one week. We visited the city’s two most famous museums:  Rijksmuseum and Van Gogh Museum.

Other notable museums include:  Stedelijk Museum, the Hermitage Amsterdam, and Amsterdam Museum.

The Rijksmuseum is an art and history museum, with an extensive collection of Dutch masters.  There are over 2,000 paintings from the Golden Dutch age celebrating Rembrandt, Vermeer, Hals, and many more masters.  More about Rijksmuseum here.

There is also an incredible art exhibit, including Dutch masterpieces, in the Amsterdam Schiphol Airport.  It’s free.

The Van Gogh Museum, located near the Rijksmuseum, is the largest Van Gogh collection in the world (pronounced “Van Goff” by locals).

This was an incredible collection featuring the paintings, drawings, and letters of the famous former Amsterdam resident.  More info here.

My favorite part:  the waterways.  The canals were built in the early 17th century as an urban planning project.

In addition to the Amstel River, Amsterdam has three main canals that form a concentric circle around the city, from which many other canals stem.

The canal ring area is designated a UNESCO World Heritage site.  There are 60 miles (100 km) of canals, 90 islands, and 1,500 bridges.  Canal boat tours are readily available and affordable. 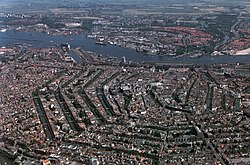 Tulips abound at Keukenhof Gardens, less than an hour away from Amsterdam in the town of Lisse.  It is open for eight weeks from March to May, highlighting seven million tulip bulbs.

Navigating through the city on boat or bicycle, visiting some of the richest art museums in the world, and enjoying the many elegant sites of Amsterdam is a true pleasure.