In some places on the west coast of North America, depending on latitude, the Anna’s hummingbird can be found all year long.

Interestingly, in the first half of the 20th century, Calypte anna were only seen in California and Baja California.  But with the planting of exotic flowering trees and gardens, this tiny, sparkling bird successfully expanded its breeding range. 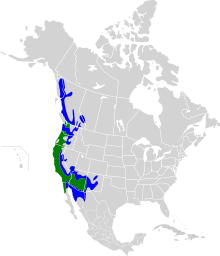 In addition to California and Baja, they now breed in several other westerm U.S. states and Canada.  They winter as far north as British Columbia.   More info about Anna’s Hummingbird here.

When we first moved to our property in northern California, we only had hummingbirds in the warm months.  At 2,300′ altitude, we have occasional winter snow and ice.  Calypte anna have a body temperature of approximately 107 degrees Fahrenheit, and need warmth.

But the hummingbirds, we knew, lived just 20 miles away in the lower elevations all year round, even the winter.

So we installed several nectar feeders, kept them filled and cleaned throughout the year, even though the hummingbirds were not present in winter.

Then male Anna’s started showing up at the feeders, and staying through the winter.  A few years later, the females wintered here too.  I am happy to report, they are now here rain or shine, summer or winter.

Yesterday I glanced over to see a male at the feeder, and then, as if to say hello, he lifted from the feeder, buzzed his wings and stayed in place.  At that moment the sun, in its low winter angle, came right through the fluttering wings.  There was no color because the sun was blinding, but instead it was an apparition — a tiny angel at our feeder.   Blissful.

46 thoughts on “Winter with Anna’s Hummingbirds”