After the discovery of gold in California and the subsequent wave of prospectors, investors, and businessmen, mail sent from the eastern U.S. to the west had suddenly become an important issue.

In trotted the Pony Express in 1860:  a privately-owned company that supplied a transcontinental mail service from St. Joseph, Missouri to Sacramento, California.  There were Pony Express stations dotted across the western plains, mountains, and desert about every ten miles–the distance it took for a horse to tire after traveling at a gallop.

The rider would change horses at every station, and usually travel about 75-100 miles at a stretch.  With 184 stations and 80-120 riders, the mail went in both directions every day and was boasted as reaching its destination in ten days or less.  If you think about a letter being carried from one side of this country to the other in ten days on horseback, you can figure there was masterful speed and dedication in this endeavor. 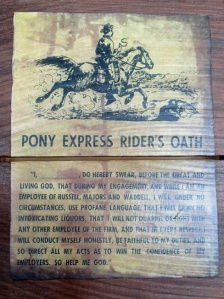 Riders not only encountered extreme weather in this year-round enterprise; but robberies, raids, and ambushes also threatened their lives.  The men could not weigh more than 125 pounds, and orphans were preferred.  Mark Twain described the riders he had seen as, “…usually a little bit of a man.”

The mail was attached to pouches, called mochilas, and carried amidst the saddle, along with the riders’ essentials:  a water sack, a Bible, a horn for announcing their arrival, and a revolver.  William Cody “Buffalo Bill” was the most famous of the riders, who was said to have ridden the longest journey of 322 miles, when he found his relief rider had been killed.

While driving through the Great Basin area in Nevada recently, I saw the remnants of several Pony Express stations.  Highway 50 parallels the original Pony Express route.  Every ten miles there would be a sign and some rubble.  One of the station’s foundations is pictured here.

Surprisingly the Pony Express only existed for 18 months.  When the transcontinental telegraph was invented in 1861, delivering letters by horseback was no longer necessary.

I don’t know.  Maybe it was the road trip, driving 10 and 13 hours a day; maybe it was studying the Pony Express riders and all their perils.  But either way, driving an engine-powered vehicle across a paved road for a few hours just seems easy now.