No, I decided, I need to pay more attention to the natural world around me. What time did the sun come up today?  Or did it ever come up?  Was there wind or clouds today?  What about this parking lot I have parked in, does it have any birds in it?  And what is that flower bush with the fragrant white flowers? It’s grounding, not only for a novelist, but for everyone. 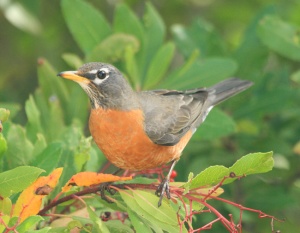 The American Robin, pictured here, is a good example. Look at this bird. Who knew robins were so beautiful?  That distinct eye ring and bright clay-colored breast make him look so dapper. You can see there are not many berries left on the toyon branch because he has just made a hardy meal of them; only a few berries remain, behind his body. Even his posture is perceptive, so sharp and alert. He’s in the thrush family, the same family as the bluebird. Most Americans know the robin, but do they know what an exquisite creature it is?

Where I live, in California, the winter boasts an abundance of robins. West coasters, Floridians, and some residents on the south gulf coast of the U.S. have the winter delight of the American Robin throughout the winter. The birds migrate here where the winter temperatures are more mild. Yesterday I looked up into the sky on two different occasions and I counted at least 100 robins. The sky was awash with robins.

What a glorious sight, especially when the sun is shining, to look up and see all those orange-breasted birds traversing the sky. If it is near dusk, the lower sun lights up each robin breast and turns it into a bright red beacon. They fly slightly apart from each other and do not flap in unison, and as a result they spread across the sky in huge flocks. They roost in large flocks at night, so you often see them in the early morning or at dusk in these abundant flocks.

Even if you’re not looking up at the moment, you can often hear one or two, and that is the indication that the sky may be full. They have a sort of chuckle sound, tut tut tut. Another sound is similar to a horse whinny. They often sound to me like they’re laughing. This makes me smile. The robin also has an incredibly fluid and melodious song, but we don’t usually hear that in the winter because they’re not in their breeding mode, not focusing on being attractive to a mate. Even when they’re not in the big flocks, you can hear them. I’ve heard them in many parking lots, on busy street corners, parks, urban streets.

In California there is a large part of the human population that has also migrated here from other parts of the United States. We were taught from a young age that seeing the first robin is the sign of spring. And it is, if you’re in the eastern United States or Midwest or the Rockies. But this is simply not true if you live where the robin spends its winter. And yet many people who live on the west coast, where robins absolutely fill the winter sky, still believe that the robin is only here in the spring.

I know this about robins because I am a birder and I have studied birds. But there must be so many of these myths that I am misinformed about, still adhere to, simply because I am not paying attention.

My new year, this wonderful chance to live more days on this plentiful and incredible planet, is going to be about paying attention to the natural surroundings. These are things that literally ground us, help us to come out of our busy minds and pay attention to what is going on right here and now. It ensures a slower and more sure step. It helps you to take an extra moment to let that car back out of the parking space, look both ways before stepping off the curb, give an old woman pushing a walker a little more space. Alleviate the rush…listen for a thrush. And have an enlightening new year!